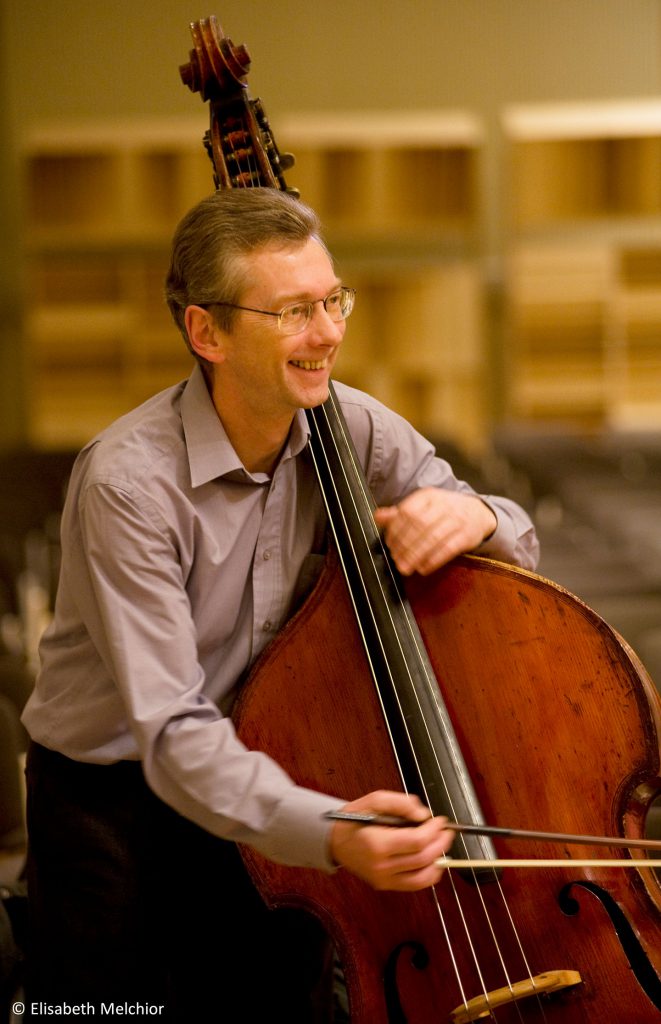 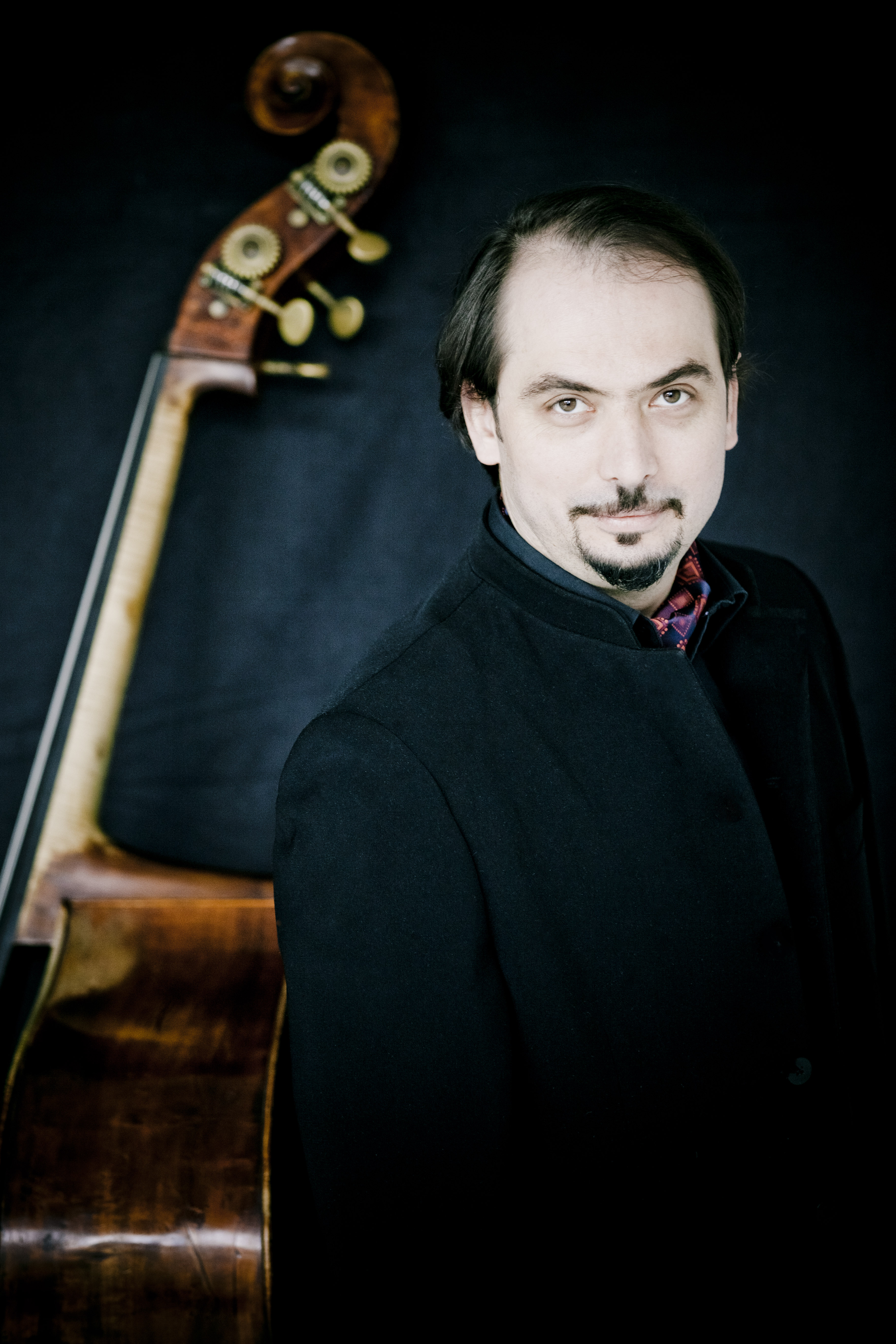 Petru Iuga currently holds a professorship at the University of Music and Arts in Mannheim, Germany and at the l’HEMU Lausanne , Switzerland.
Having received his first training in his native Romania, he was selected by Yehudi Menuhin for the International Menuhin Music Academy in Gstaad (Switzerland).
After further training at the Hochschule der Kuenste-Bern and the Conservatoire National Superieur de Musique in Paris, he became a member of the Ensemble Orchestral de Paris and principal double bass in the Munich Chamber Orchestra.Petru was also guest solo Double-Bass at the London Symphony Orchestra.
He has won numerous prizes at international competitions, including first prizes at the International Double Bass Competition in Markneukirchen, Germany (1999) as well as at the Capbreton International Double Bass Competition in France (2001). 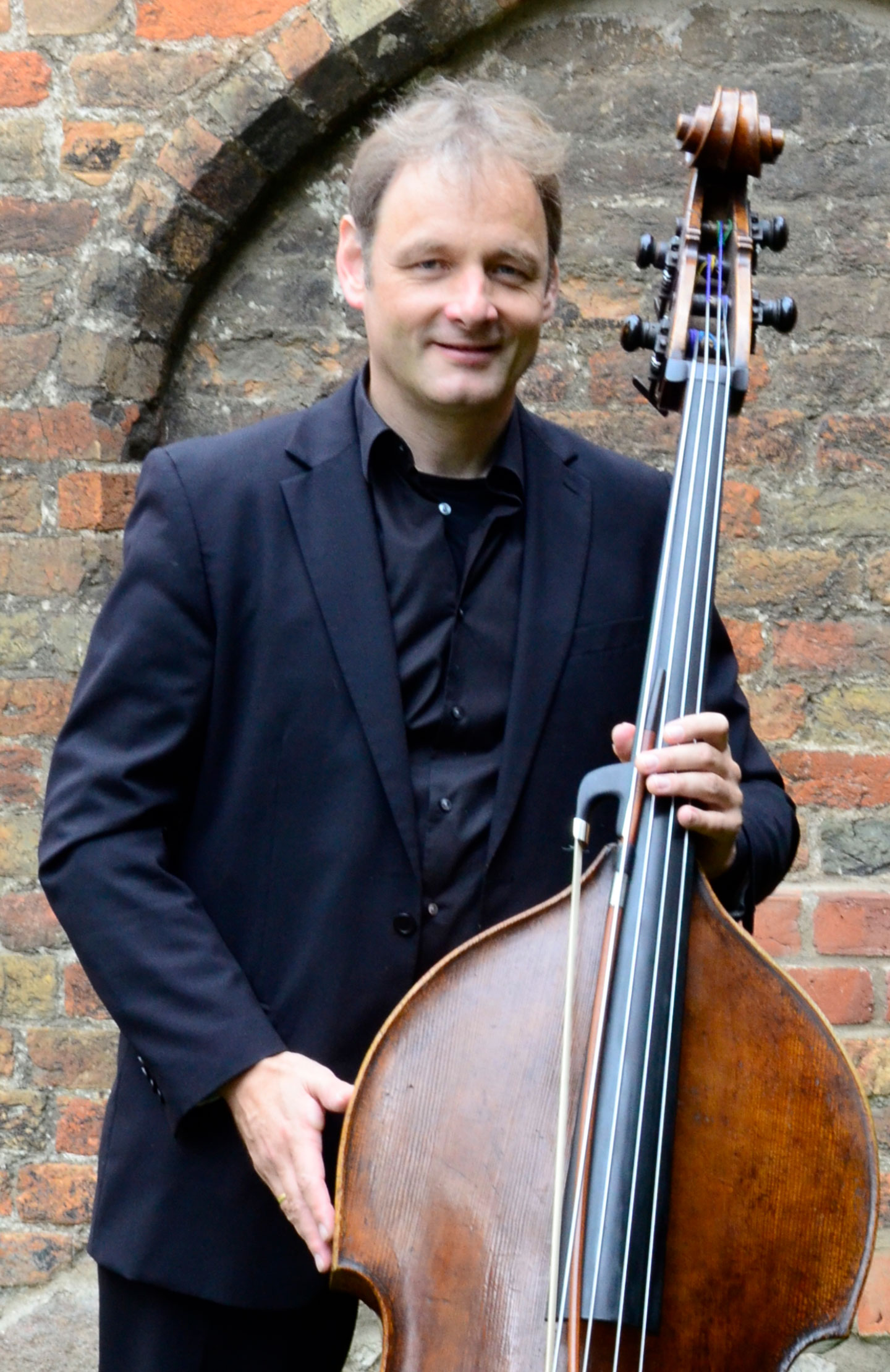 Frank Thoenes studied with Prof. R. Heister at the Folkwang University in Essen and on master classes with Prof. W. Güttler (Berliner Philharmoniker). Following his studies, he received a scholarship as a solo bassist at the Deutsche Kammerakademie Neuss under the direction of J. Goritzki. Since then he has been involved in numerous CD productions as well as solo and chamber music concerts. For example at the Festival Cervantino in Mexico, at festivals in Ascona and Salzburg, at the Pablo Casals Festival in Prades and at the Richard Strauß Festival in Garmisch. Some of his tours went to Australia, South America and Asia. He gained orchestral experience with the WDR Symphony Orchestra, the NDR Radiophilharmonie, the Hamburg State Orchestra, the Essen Philharmonic and has played among others with the conductors Claudio Abbado, Zubin Metha, Bernhard Haitink, Matthias Bamert and Michael Sanderling. He has been teaching at the Rostock University of Music and Theater since 2005. In 2019 he was awarded an honorary professorship. He is a solo double bass player with the North German Philharmonic in Rostock. He also gives master classes in Germany (double bass kaleidoscope) and abroad (China, Japan). After participating in the “International Days for New Music” in Darmstadt, where he was a fellow and also received an interpretation award, he became increasingly interested in new music. He premiered several works that composers dedicated to him, including Solo pieces by E. Janson, the concert ”Aventure” by Bodo Reinke and the Sonata for double bass and piano by R. Leistner-Mayer, which was written for the Eccles Duo (Thoenes / Hoffmann). As a sought-after chamber musician, he plays with several ensembles, among others with the ensemble ”Arabesque” (Hamburg / Berlin). The solo CD’s ”Tiefflug – Höhenflug” and ”basswärts” are available from castigo.de, jpc or from Naxos.Frank Thoenes studierte bei Prof. R. Heister an der Folkwang Hochschule in Essen und bei Meisterkursen von Prof. W. Güttler (Berliner Philharmoniker). 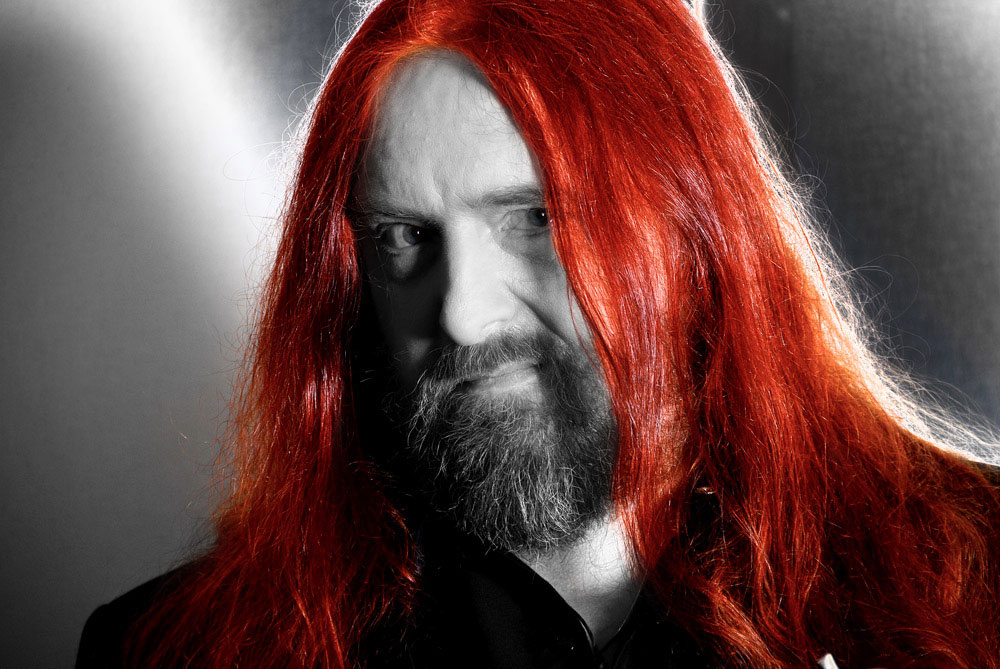 Peter Sonntag teaches electric bass and jazz double bass at the Bavarian Bassdays. Described by the rororo-Jazzlexikon as ”musician of impressive virtuosity, technical brilliance and enormous imagination, who also created his own musical world full of magic”, Peter Sonntag studied classical double bass (Prof. H. Albert) and new music (among others with Wolfgang Meyer -Tormin) at the Cologne University of Music. He works as a composer, producer, soloist, teacher, book author and endorser of international companies. His textbook “Basscraft” is one of the most successful German bass textbooks, which critics titled “A milestone among bass textbooks” (Bassprofessor) and “The Bible of All Bassists” (Nightflight). Concerts, tours, TV and radio appearances and engagements at international festivals have led him to to China, USA, Great Britain, Scandinavia, Hungary, Poland, Italy, France, Belgium, Netherlands, Austria, Switzerland. 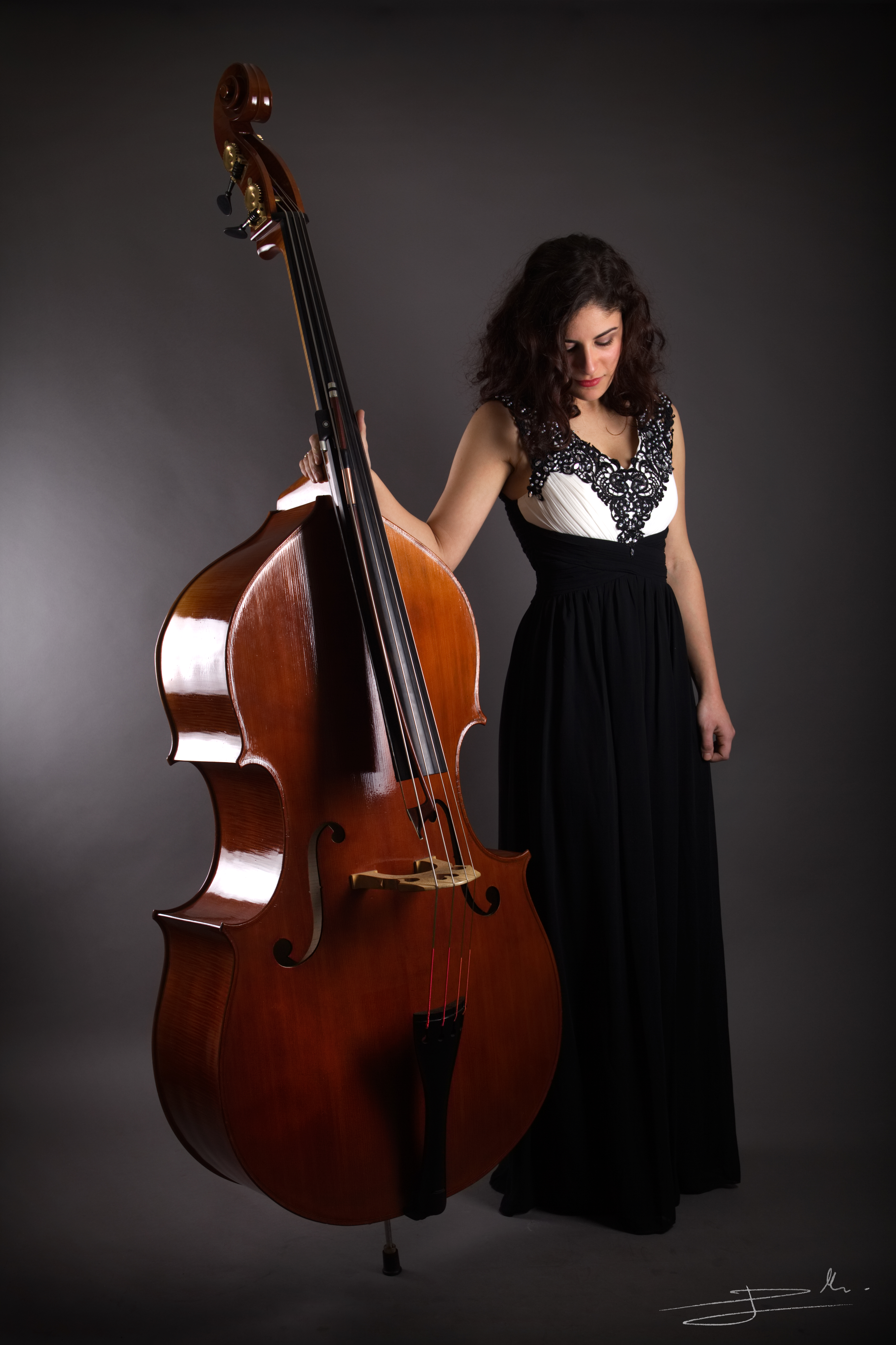 Lorraine discovered the double bass at the age of 5, and first learnt with Jean-Edmond Bacquet, before being accepted at the Paris CNSM in 2012, in Thierry Barbé’s class. She received her Masters degree in 2016 and went on to study for one year with Petru Iuga at the University of Mannheim in Germany.

Alongside the double bass, Lorraine also studies the violin, firstly working with Suzanne Gessner at the Regional Conservatoire of Paris, before being accepted at the Paris CNSM where she continues to study with Jean-Marc Phillips.

Since 2015, she has been associate principal bass for the Orchestre Philharmonique de Radio France. 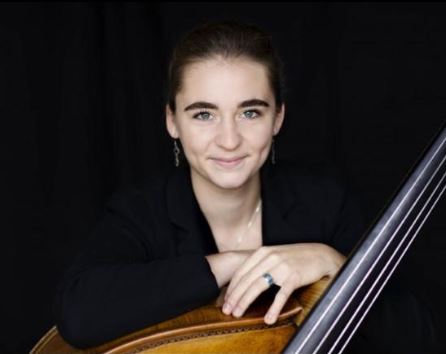 Valerie Schatz, born 1997 in Wasserburg am Inn got her first instrumental harp lessons at the age of 5. At the age of 11 she started to play double bass with her first teacher Dominik Billinger. From 2010 to 2012 she attended the music school in Mühldorf with Claus Freudenstein.

In 2012 Valerie Schatz started at the University of Music in Munich for two years with Professor Heinrich Braun and was at the same time already member of the Bavarian Youth Orchestra, the VBW Festival Orchestra of the Nations, and a permanent member of the Federal Youth Orchestra.

In 2013, she received the 1st Prize at the Jugend Musiziert competition for double bass and also the special Edgar Auer award. From 2014 the young double bass player was a permanent member of the student orchestra “Junge Deutsche Philharmonie”.

Through various master classes with Prof. Johannes Auersperg, Prof. Günter Klaus and Prof. Duncan Mc Tier, Valerie Schatz was able to further train herself and to develop an extensive repertoire.

In 2015 she moved to the University of Music in Nuremberg in order to study with Professor Dorin Marc. The young instrumentalist had during this time various temporary appointments with the Munich Chamber Orchestra, the Munich Philharmonics and the State Theater of the Gärtnerplatz.

At the age of 19, Valerie Schatz received a scholarship from the Orchestra Academy of the Bavarian Radio Symphony Orchestra . She worked there for two years, participating in numerous symphony concerts, chamber orchestra performances and travelling with well-known conductors such as Mariss Jansons, Daniel Harding…

Her service at the Vienna State Opera started on January 1, 2019, together with temporary appointments with the Vienna Philharmonic Orchestra, allowing her also to travel extensively with both orchestras. 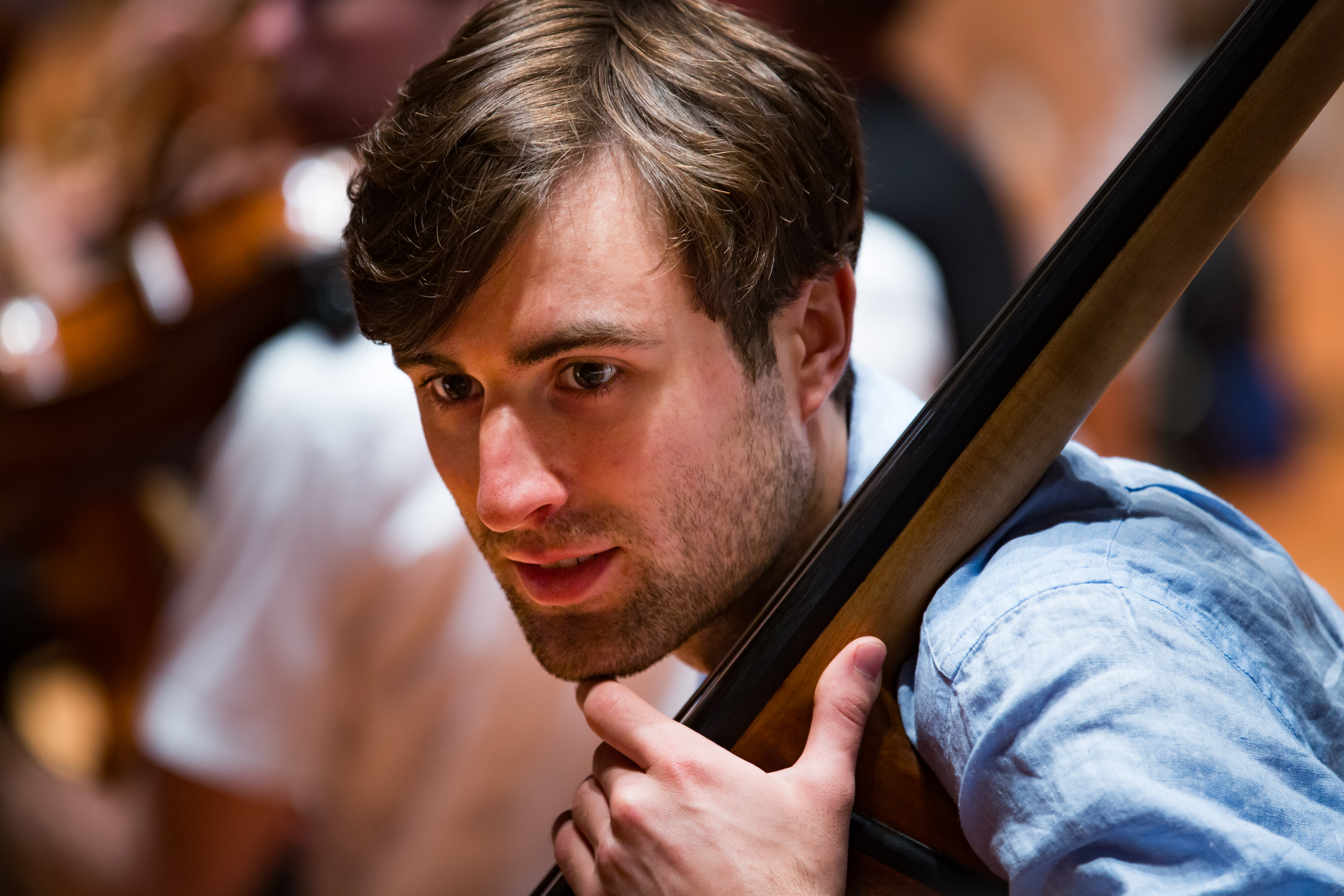 Dominik Luderschmid was born in Augsburg in 1986 and started playing the double bass at the age of 13. Before graduating from high school, he played in the Swabian, Bavarian and Federal Youth Orchestras as well as in the Bavarian State Youth Jazz Orchestra, was a national award winner for ›Jugend musiziert‹ and a young student at the Nuremberg / Augsburg University of Music.

He then studied at the Music Academy in Nuremberg with Prof. Dorin Marc classical and Rudolf Engel jazz double bass, was a member of the Junge Deutsche Philharmonie, was an academic with the Munich Philharmonic and regularly helped out in various orchestras.

After completing his classical studies, he moved to Amsterdam to complete his jazz studies at the music conservatory there. He then moved back to Munich, where he completed a master’s degree with Prof. Heinrich Braun and became a member of the Munich Chamber Orchestra.